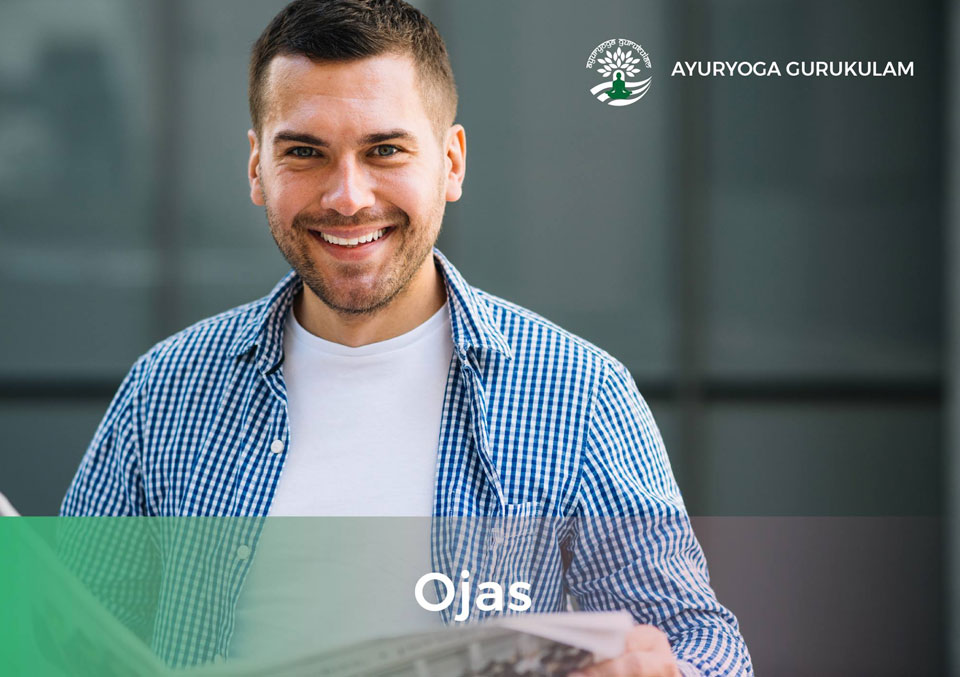 Introduction
——————–
Concept of ojas is very important point of discussion available in Ayurvedic literature. As the nomenclature describe, the seven dhatus support and sustain the living body. The extreme power of all the dadhus are known as ojas.

Definition
————-
•The essence of dathu commencing from rasa and ending with sukra is ojas and that itself is bala.

•Ojas is one of the three “subtle” or “vital” essences within the body – the other two being prana and tejas. (Kapha rules ojas, while vata rules prana and pitta rules tejas)

•Ojas is a vital, energy that, with the help of prana, controls important life functions. It is our primal vigour and maintains the auto-immune system, mental intelligence and is the vital energy that governs our hormonal balance. When translated the world ojas literally means vitality or bodily strength. Balanced ojas is necessary for biological strength and immunity.

•We don’t have much ojas – the ancient texts say that in a healthy person has only eight drops of Ojas stored in the heart – yet what we have goes a long way and is considered the prime energy reserve for the whole body. When sickness arises in the body or mind this is a sign of depletion or inhibited production of ojas.

•Ojas is considered to be the most refined by-product of digestion and is a highly subtle substance that borders between the mind and body. It is the pinnacle essence (eighth tissue) that only forms as a result of the production of the seven forms of bodily tissues (also called dhatus). It is the subtle essence of the reproductive system and all the vital secretions.

•It’s important to note that our ojas can be considerably diminished even if we’re not experiencing overt sickness. This is likely the case if you are feeling generally stressed out, fatigued and in need of stimulants to keep you operating smoothly throughout the day.

Ojas and the mind
————————
On the psychological level ojas is responsible for compassion, love, peace and creativity.

Through certain techniques like pranayama, meditation, and tantra it is possible to transform ojas into spiritual strength. And if thoroughly developed the power of spiritually re-directed ojas can create a potent and protective energetic aura around the crown chakra.

How do ojas get depleted?
—————————-
Depletion occurs when we are using our ojas up at a faster rate than we are creating them.

Types of ojas
——————-
The ojas is of two types para (the par excellence) and apara ojas . The terms para and apara seems to be used for primary or main and secondary ojas and respectively.

The para circulates in the all body, remains in heart in avery small quantity measuring 8 drops only. Even if a little of para ojas is destroyed the body may be perished.

Characteristic features of ojas
—————————————-
Contains of predominance of jala(water) mahabhoota

Causes of decrease of ojas

Injury to the body